Medical marijuana & autism: ‘I’m getting my boy back,’ mom says

Parents try cannabis to help their children with autism

At first, Joann Fouquette’s son, Ezra, was hitting all the milestones. It’s what every new mom hopes for: a happy, healthy baby.But around 17 months, things started to change. He stopped speaking. He started covering his ears and hitting his head on the floor like something was bothering him.Fouquette remembers her mom telling her, “I think we need to get him tested. There’s something definitely going on there.”Five months later, in 2012, Ezra was diagnosed with autism spectrum disorder. 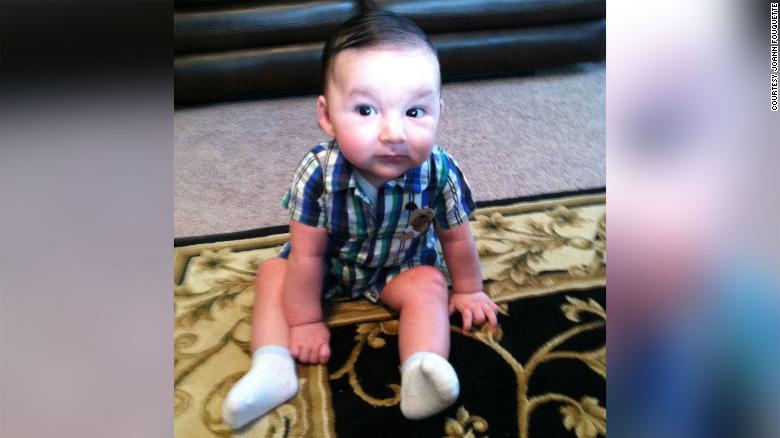 Ezra Fouquette was diagnosed with autism when he was 22 months old.Autism is a neurodevelopmental disorder that affects 1 in 44 children in the United States, according to the CDC. It begins early in life, and the core symptoms are social and communication issues as well as repetitive behaviors and rigidity.

Children and adults with autism tend to have difficulties with verbal and nonverbal communication and social interactions, depending on the severity.”These are people who have difficulty communicating — in particular socially. They may speak very well, but they can’t carry on a conversation. Then you have the opposite end of the spectrum, where you have children and adults who are entirely nonverbal,” said Dr. Doris Trauner, a pediatric neurologist and distinguished professor of neurosciences and pediatrics at the University of California, San Diego.

“They have a certain routine. They like to do things over and over again,” she told Gupta. “They have repetitive behaviors, the most typical of which are things like hand-flapping or spinning in circles.”But autism can also lead to more troubling issues like severe disruptive behavior and self-harm.

Early detection of autism in children has improved, but disparities remain, CDC studies suggest“Aggression and self-injurious behaviors are unfortunately very common, especially in children with severe autism,” Trauner said. “Anything from repetitively banging their head against a wall to hitting their head with their hands to pinching themselves or biting their hands.”Behavioral therapy, occupational therapy and speech therapy can help, but there are no US Food and Drug Administration-approved treatments for the core symptoms of autism.There are two FDA-approved antipsychotic medications, used to treat bipolar disorder and schizophrenia, that are approved to treat children with autism, but only if they show severe aggression or self-injury.”These medicines are effective for those symptoms but unfortunately are associated with significant side effects,” said Dr. Eric Hollander, director of the Autism and Obsessive Compulsive Spectrum Program at Montefiore Health System in New York. “It can predispose them to the development of things like diabetes or cardiovascular-type problems.””There’s an important need to develop new treatments, both to treat the core symptoms of autism … and to have less of a side effect burden,” he added.

When it came to her son Ezra, Fouquette tried everything she could think of to help him.”We tried gluten-free, casein-free, dairy-free. We’ve tried homeopathic remedies. We’ve tried every therapy out there,” she told Gupta.But she didn’t want to give him psychotropic drugs when he started becoming more aggressive.”I didn’t want to try any of those just because there were so many side effects,” she said. “But, at one point, I had a lot of bruises on me because he was getting more violent.”Fouquette was desperate to find help. That’s when she saw a story on the local news about a clinical trial involving children with autism and CBD, the non-psychoactive part of the cannabis plant, at the Center for Medicinal Cannabis Research at UC-San Diego.”He was 9 then,” she said. “What am I gonna do in the future as he continues to grow if I’m already having a hard time with his aggression now?”Fouquette had no hesitations when it came to trying medical cannabis for her son.”I’ve seen CBD used for kids with epilepsy,” she said. “I saw how much it helped other people, and I thought, ‘it’s all-natural. There may not be any real side effects with it. Why not try it?’ “So she enrolled Ezra in the clinical trial.

Medical cannabis, autism and the brain

Trauner is the lead researcher for the UCSD trial, a double-blind placebo-controlled crossover study, which means the participants don’t know when they are receiving the placebo or the medicine, and neither do the doctors. Researchers are examining how CBD could affect the brains of children with autism.”We know that in autism, there are some differences in brain chemistry. There are some changes in neurotransmitter systems, both in the dopamine system and in the serotonin system, that may contribute to some of the symptoms,” she told Gupta.

Dr. Sanjay Gupta on medical marijuana: We are in an age of wisdom, but also an age of foolishnessSerotonin and dopamine are neurotransmitters that carry signals, or information, from one nerve cell to another. Serotonin is thought to regulate mood and has a big effect on early brain development. Dopamine can reinforce behavior when we receive a reward.Several studies have shown that dopamine levels that are either too low or too high in children with autism can cause certain areas of the brain to malfunction, resulting in high levels of repetitive behaviors and reduced levels of social interaction, Trauner said.In animal models studying autism, serotonin levels in the brain may be lower than expected, and adding serotonin improves social functioning in mice, she said.”And CBD, among many other things, does have effects on the serotonin system with increasing the availability of serotonin,” she added. “And that may be helping in terms of social interactions in particular.”Across the country in New York, a similar trial, involving children and adolescents with autism and the cannabinoid cannabidivarin (CBDV), is also underway at Montefiore Health System.”We know that autism is a developmental disorder that begins early on as the brain is being shaped,” said Hollander, the lead researcher on this double-blind placebo-controlled study.”I think CBDV can play an important role in autism,” he said. “It can decrease excitation in neurons and increase inhibition.”When children with autism are too excited or don’t have enough inhibition, it can lead to explosive behaviors, temper tantrums, rage or self-injury, and they can display repetitive behaviors, Hollander said.”So it changes the ratio of excitation to inhibition in different neurons,” he said. 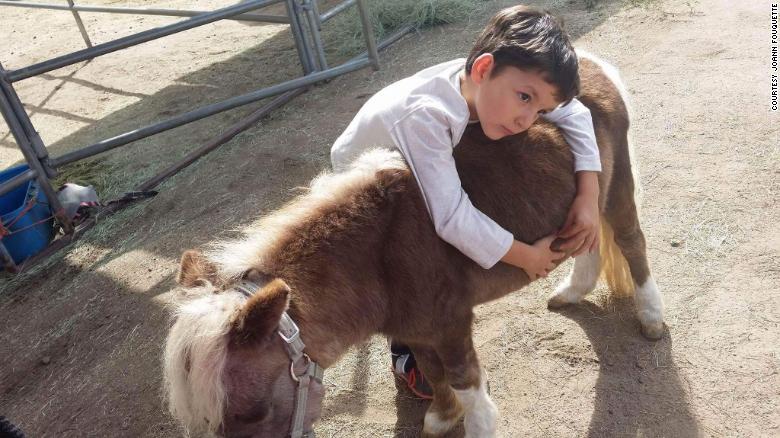 Ezra’s mom, Joann Fouquette, said she thinks her son’s aggressive behavior stemmed from not being able to communicate his needs since he was mostly nonverbal.While both studies are still ongoing and the blinds have not been broken, early feedback has been positive.”Some of the patients have had a really substantial benefit,” Hollander said. “We’ve seen what we had hoped, which was a significant decrease in the irritability symptoms, temper tantrums or explosive episodes. We have had patients who have had improvement in their repetitive behaviors, as well.”In California, similar reports have come in from parents.”We’re seeing some pretty impressive changes,” Trauner said. “Children whose aggressive behavior was daily, it’s gone away. I mean, gone away. … Children whose self-injurious behavior is better, and they’re to the point where the calluses on their wrists are starting to heal,” she said. “A lot of the kids are more social.”But Trauner cautions that more research needs to be done.”It’s too soon to get excited about it. I think there’s some reason for hope, but it’s not a good idea to run out and buy it and just try to use it on your own,” she said.”There are several reasons for that. One is that it can be toxic. It can cause liver dysfunction,” she added. “It’s also not clear what dose is the best dose if it does work, and whether what you’re buying really has what you think it does, because it’s unregulated.”

‘I’m getting my boy back’

During the trial, Fouquette’s son Ezra received the placebo at one point and CBD at one point, but Fouquette and the doctors still don’t know when he was getting it.

How this Texas family uses marijuana to help their daughter 02:47Ezra was mostly nonverbal going into the trial, she said. But in the first few weeks, something remarkable happened.”One day, I was at the grocery store, and my husband sent me a video. And it’s Ezra laying on the floor wrapped in a blanket, and he’s singing,” she said. “He had never sung before … and he’s singing the entire song.”Fouquette told Gupta what was going through her mind at the time. “I’m getting my baby back. I’m getting my boy back,” she said, fighting back tears.”I’m able to communicate with him. He’s talking to me. He’s happy. He’s not aggressive anymore. He’s singing,” she said. “What more could I ask for?”Since Ezra finished the study a year ago, he has not shown any aggression and has continued to communicate.”He has had no regression whatsoever,” she said. “It helped him … whatever is going on in his brain, make those connections that he needed to make. And once those connections were made, he never lost them.”Get CNN Health’s weekly newsletter

Sign up here to get The Results Are In with Dr. Sanjay Gupta every Tuesday from the CNN Health team.It’s not clear what role the treatment may have played in Ezra’s progress. The study hasn’t been published, and it wasn’t looking at whether cannabis or CBD could be neuroregenerative to the brain. More research is needed in this area.”Some of the kids who’ve shown an effect … show it for several weeks after the study drug is taken away. And some seem to maintain some improvement,” Trauner said. “But I don’t know why that would be.”

We want to hear your thoughts!

Get in touch with us and let us know how we did with this article.